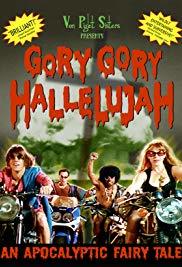 Four actors who tried to play Jesus with their own unique spins and got rejected go on a motorcycle ride across the country. They end up getting in a fight with a gang of Elvis impersonators. When one of the Elvises is accidentally killed, they flee to not get arrested. Unfortunately, they ride straight into a fundamentalist Christian town that wants them dead for their blasphemies. As the actors fight for their lives, they uncover an apocalyptic conspiracy.