Film / The Greatest Story Ever Told 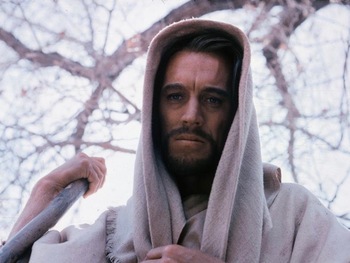 The film so holy, it turned Telly Savalas bald.

A 1965 epic from director George Stevens, The Greatest Story Ever Told portrays the life of Jesus, his ministry and miracles from Nativity to Resurrection. For a plot synopsis you might as well just read The Four Gospels.

While Story was not the first film of its kind, this broad scope is one of its notable features and was something the creators wanted to play up. The then-unknown (in the U.S.) Max von Sydow was cast as Jesus, but the rest of the cast and crew was filled with big names, some coming in for short cameos. Among the actors seen here are Charlton Heston, Claude Rains, José Ferrer, David McCallum, Donald Pleasence, Sidney Poitier, Angela Lansbury, John Wayne (as the Centurion at the crucifixion), and the aforementioned Telly Savalas (who shaved his head for his role as Pontius Pilate in this film and then decided never to grow it back).

Stevens, along with uncredited co-directors David Lean (Mr. Epic Sweeping Landscapes) and Jean Negulesco, even added exterior shooting in the great open spaces of the Southwestern U.S. to add a more epic feel than Real Life Israel could offer.