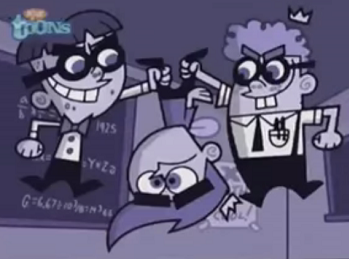 Dinkles: You're such a polynigmion.
Jock: I don't even know what that means. How could I be offended by that?
Dinkles: When you know what it means, you're gonna be super offended.
— Steam Train
Advertisement:

Regular bullies (mostly the Jerk Jock types) are bad enough. They steal your lunch money, shove you into lockers, and generally do everything they can to inflict Bully Brutality on anyone smaller or weaker than them. But at least there's certain prerequisites to being The Bully; they've got to be big enough and strong enough (as well as popular enough) to put the hurt on people. Otherwise, how could they?

Well, this character figured it out.

Have an embarrassing diary on your computer? The Nerdy Bully will hack into it. And email it to all your friends. Bomb a test? This guy'll let you know how dumb you are. At length. And he'll make sure the rest of the school knows it too. And heaven forbid you have an IT problem in his presence — the sheer weight of his mockery might drive you mad. Or at least to transferring schools.

The Nerdy Bully is what happens when a Nerd uses his talents to act with typical bullying characteristics, abusing his power, skills, and knowledge to make life hellish for others. They tend to show up in works centered at institutions which are nerdy to begin with, such as schools that specialize in math and science, and they also sometimes have an aggressively atheist or antitheist bent. If caught, you can expect a flustered insistence that he can't possibly be a bully because he's just a nerd...no matter how obvious his abusive behavior is to the others in the room (which one of them may have recorded in some way).

If he was a victim of bullying himself (in which case compare He Who Fights Monsters), he might invoke Who's Laughing Now?. More often than not, they're the Insufferable Genius, or a Bitch in Sheep's Clothing.

Contrast Lovable Jock, a benevolent athlete as opposed to a malevolent geek.