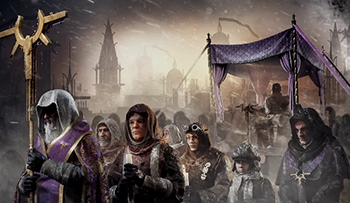 "If we must have a tyrant a robber baron is far better than an inquisitor. The baron’s cruelty may sometimes sleep, his cupidity at some point may be sated; and since he dimly knows he is doing wrong he may possibly repent. But the inquisitor who mistakes his own cruelty and lust of power and fear for the voice of Heaven will torment us infinitely more because he torments us with the approval of his own conscience and his better impulses appear to him as temptations."
— C. S. Lewis, "The Humanitarian Theory of Punishment"
Advertisement:

Simply put, a Theocracy is any society that is ruled by God or by gods, which in practice usually means The Church is the government. Often the laws of a theocracy are based off religious law, or claims that God (or Gods) is the supreme ruler of their state with the temporal ruler almost always being the High Priest. This is especially prevalent in pre-modern settings.

The term was first used by Flavius Josephus, a Romano-Jewish author, who used it positively to describe the Israelite system of government.

In settings were God or gods definitely exist and have powers above and beyond any mortal government, it could be argued that every society would be a de facto theocracy whether consciously modelled on one or not, especially if worship of such deities was the main religion, but normally that is not what this trope means.

Note that true theocracies, where secular government is virtually non-existent, are fairly rare. Most often the Church will simply have a lot of secular power and sometimes a parallel government: authority over religious/moral laws, its own bureaucracy, its own army, etc.

Theocracies, in both fiction and Real Life, have a rather bad reputation (at least in the modern, post-Enlightenment era) — as such, the Theocracy is almost always portrayed negatively, and is often portrayed as The Empire and/or a brutal, authoritarian Dystopian Dictatorship that preaches The Evils of Free Will. Thus a Corrupt Church is often the head of a Theocracy, but not always. See also God-Emperor, where the rulers go one step further to proclaim themselves living gods with a personal religion. Compare Church Militant, where the clergy is badass, but not necessarily the rulers of a country.

Not to be confused with the Christian Rock band Theocracy.

Alternative Title(s): One Nation Under God