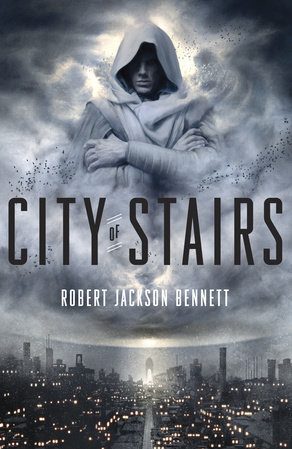 The Divine Cities is a fantasy series authored by Robert Jackson Bennett.

City of Stairs, the first book in the series, was released in September 2014. Bulikov was once the Seat of the World and host to a pantheon of Divinities that provided everything their followers needed and led them to victory in expanding to an empire. That is, until someone from one of their conquered colonies, Saypur, discovered a way to kill the Divinities. In the years since, Saypur has risen to the status of a world power with the help of technology while Bulikov has been reduced to a destitute backwater.

Shara Komayd, spymaster and operative from Saypur (and a descendant of the very man who killed the Divinities), has always been fascinated by the Continent's history — when a historian and reformist she was personally close to shows up beaten to death in Bulikov, she seizes the opportunity to show up in Bulikov and find his killer.

Nothing, obviously, is what she thought it was at first.

The second book in the series, City of Blades, was released in January 2016. A generation ago, the city of Voortyashtan was the stronghold of the Divinity of War and Death. Now, the once-powerful capital is a wasteland of sectarian violence and bloody uprisings, and General Turyin Mulaghesh — foul-mouthed hero of the battle of Bulikov, rumored war criminal, ally of the embattled Prime Minister Shara Komayd — has been exiled there to count down the days until she can draw her pension and be forgotten.

At least, that's her cover story. The truth is that the general has been pressed into service one last time, dispatched to investigate a discovery with the potential to change the world — or destroy it.

The third book in the series, City of Miracles, was released in May of 2017, with Sigrud je Harkvaldsson as the central character. Thirteen years after he last saw her, Sigrud learns that his friend, former Prime Minister Shara Komayd, has been assassinated, and travels to the booming city of Ahanashtan to investigate. Quickly it becomes clear that Shara had once again run afoul of a mysterious Divine being, who has now set his eyes on also murdering Shara's daughter — and her new bodyguard, Sigrud.

The Divine Cities provide examples of: