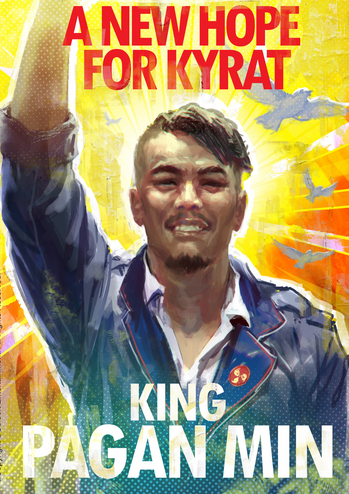 The whole world's going to hell. Crime, corruption, moral degeneration, and a soft, weak government that can't do a thing to help. In comes this guy, promising to end all that—and being the idiots we are, we elect him, or at least wildly applaud his coup d'état. Once he seizes power, he may become The Generalissimo.

The Glorious Leader is a political outsider who uses romantic and idealist rhetoric to hide some malevolent agenda. He talks lovingly about the Good Old Ways and/or the great new age he will bring about, and every other sentence out of his mouth is a New Era Speech. Bonus points if he fingers some other group of outsiders as The Enemy, blaming them for the degenerate modern era, or decides the country ought to go to war on some implausible pretext just to prove its military strength.

The Trope Codifier, of course, is Adolf Hitler. Other examples: Mr. Saxon, Darth Sidious, tyrannic leaders all throughout the 20th century, Otto von Bismarck, Josef Stalin, and Mao Zedong have been accused of being this/portrayed this way (although there is room for debate about whether these portrayals are strictly speaking accurate). However, although this trope became much more common in fiction after World War II, it did not originate in the 20th Century. Various usurper Kings-or other rulers who were viewed as coming by their position through illegitimate means-throughout history have also been portrayed this way by their contemporaries (regardless of whether the facts actually support this portrayal). Particularly if female. Similarly, in myth and fantasy fiction alike: usurpers or rulers viewed as otherwise illegitimate are almost always this trope. If a ruler is this without being a usurper or otherwise illegitimate: then expect him/her to be corrupted by or tricked into being the puppet of some other entity.

Contrast Dark Messiah, who this guy is dangerously close to becoming if there's a religious angle to the story.