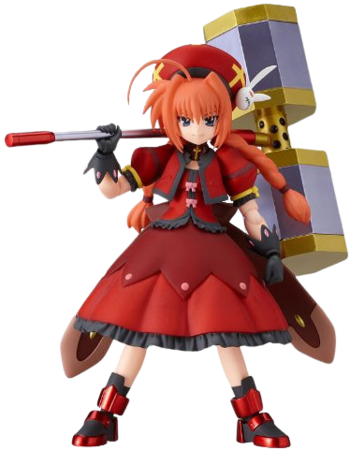 When all you need is a hammer...
Advertisement:

A character whose lithe, lightweight appearance suggests a Fragile Speedster (or, at the least, a character of average size compared to others) but it turns out this character is a Mighty Glacier, fully capable of carrying a BFS or a huge war hammer.

Compare with Cute Bruiser, where a fragile-looking character is strong, but not slow. Also, like that trope, this trope is not confined to female characters. Often feature Muscles Are Meaningless. This trope is the inversion of Acrofatic. May be a Super-Strong Child depending on age.

Not to be confused with an Ice Queen, which has more to do with personality than toughness. For large firearms counterpart, see Small Girl, Big Gun.

Related to Pint-Sized Powerhouse, a character whose small stature contrasts their enormous power.