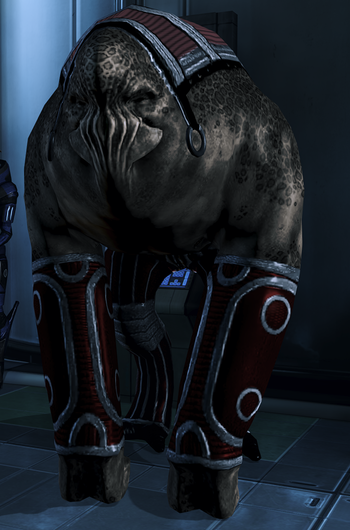 "Human, delighted welcome. It is good to meet you."
Mental note: Do not get in an arm-wrestling match with an Eridian.
— Ryland Grace, Project Hail Mary
Advertisement:

A common trope in Science Fiction, the Heavyworlder is someone who is adapted to life in a high-gravity environment — either a human being who has been altered to survive through Genetic Engineering or Hollywood Evolution, or an alien who evolved on such a world in the first place.

One factor common to nearly all Heavyworlders is prodigious physical strength.note Physical stamina would be just as important if not more when carrying around twice your weight every day, but strength tends to be the focus as feats of strength are more exciting than just not getting tired. Many versions will therefore be The Big Guy, because size is so commonly associated with strength. Other (some might say more realistic) depictions will be short and squat, because basic mechanical considerations and the Square-Cube Law show that it's much more advantageous for a Heavyworlder to have a compact, stout, but short body, not unlike common portrayals of Dwarves in fantasy.note  In terms of team composition, they are still fairly likely to function as The Big Guy

Usually they have personalities to match (imagine an entire race as The Big Guy). A few exceptions are noted below. In fights, a Heavyworlder is usually a One-Man Army, though they can vary between being Lightning Bruisers and Mighty Glaciers because while being freed from their heavy gravity can grant them much more agility, they may be designed just to hold up their own weight, not move it particularly fast. Likely to not know their own strength when on worlds with lower gravity.

A common variant is when an ordinary human visits a low-gravity world, and is treated as a heavyworlder in comparison to the natives. In vintage SF, this was often used to show that Humanity Is Superior.

For the opposite, see Lightworlder.