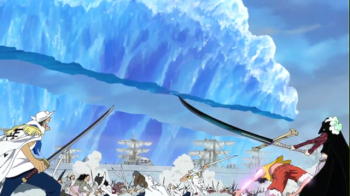 Good thing he dodged that.
Advertisement:

Implausible fencing powers are, collectively, the ability to do things with swords that really shouldn't be possible. This superhuman capability with a blade usually comes from pure skill in the art of swordplay and generally constitutes a Charles Atlas Superpower, though occasionally its backed up with explicit powers like Super Strength, Super Speed, and/or Combat Clairvoyance, as well. Often the purview of the Master Swordsman, implausible fencing powers are virtually a requirement to give swords a fighting chance in Guns vs. Swords.

The scope of implausible fencing powers is broad enough to be considered a Super-Trope, covering a number of Sub Tropes. Below is a list of them:

See Improbable Aiming Skills for the ranged weapon counterpart. Implausible fencing powers are the leading reason why Guns Are Useless. You might also want to check out our Useful Notes page on Swords.