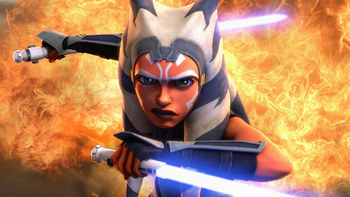 With Dual Wielding as well!
Advertisement:

Also known as "icepick" grip, this means holding the grip of a dagger, a sword, a katana or whatever so that the business end points the direction opposite to the thumb, in contrast to the usual point-up or "saber" grip.

There are advantages with this style

of wielding a knife, namely that it facilitates certain grappling maneuvers (you can use the blade as a hook to assist in maneuvering the enemy, or to inflict damage during a grapple), defensive maneuvers (you can lay the blade against your forearm and let that take the blow of a heavier weapon instead of your wrist), allows for more powerful downwards and inwards strikes, allows for extreme angles of attack at extremely close range, and has sometimes been viewed as more intuitive (and thus easier to learn and apply) than the regular grip. That said, the wielder's reach is reduced compared to a forward grip, and it makes direct thrusts from below more difficult. Both point up and point down have their uses, and one may quickly switch between grips.

The reasons for using a reverse grip vary, depending on the character and work. The grip might be a tactical choice to facilitate blocking, grappling, slicing, downward stabbing motions or any combination thereof. It might be used in conjunction with Dual Wielding to provide a more diverse range of strikes. It might be the most convenient grip to use on a weapon that is drawn quickly. It might be used to indicate that the user is a hardened or experienced killer. Of course, it also simply looks cool.

The use of a sword in reverse grip takes the cool factor one step further, making for an exotic display of slicing in a figure of eight with a swimming motion of the arm and wrist. It can also be combined with spinning or dual wielding; a character with two swords can hold either one or both of them in reverse grip. Perhaps this is supposed to be the secret technique unknown to all those chumps who swing their sword the usual way. In reality this is Cool, but Inefficient. Biomechanical limitations as well as the different nature of how swords are used in fighting cause the reverse sword gripper to lose reach, cutting power, ability to parry or exert leverage in the bind, and ability to protect the sword hand. Admittedly there are useful historical techniques that involve reversing one's grip on the sword, but these are more situational and limited in application than what you tend to see in movies. See the Analysis page for details.

Related to Gangsta Style, with the difference beyond weapon types used being that the Reverse Grip can actually be practical if used in the right context.