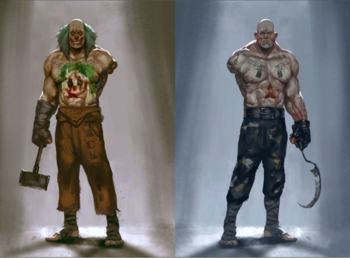 "The stars and stripes meets the hammer and sickle"
— ABC, Between You and Me
Advertisement:

Drop the Hammer for smashing. A Sinister Scythe for slashing. Put 'em together and what do you got?

Inspired by work from German philosopher Karl Marx, Communism evolved and became a very popular social, economic and political movement in the East, most famously Russia.note Some other variations existed, though Marxism (both what Marx personally envisioned, and how later followers took it) won out as the most popular form. After the Revolution, the Soviet Union's Communist Party erected their flag across the country: a red flag with a hammer and sickle and a red star. The hammer and sickle were meant to represent the working class: the hammer representing the industrial worker, while the sickle represented the farmer, toiling in the fields.

In fiction, the hammer and sickle are a popular, Dual Wielding weapons-of-choice for your Token Minority Russian characters, be they Dirty Communists, Chummy Commies, Captain Patriotic or some other characters with Patriotic Fervor towards Glorious Mother Russia or the Communist philosophy. The hammer and sickle could be normal steel and wood, swung around with efficient weapon skillz, or it could be supercharged on Soviet Superscience.