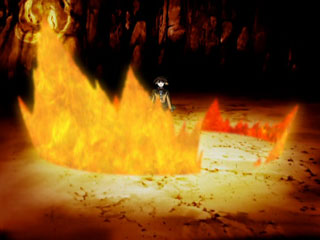 A commonly seen element of a climactic battle involving The Hero and their opponent being encircled by a flaming ring. Much like a boxing ring or a gladiatorial arena with sealed exits, it is used to indicate that neither the Big Bad nor The Hero have the option of running away from the Final Battle, and the story will end with one of the two dead. Most frequently used by villains, especially Magnificent Bastards who want The Hero to be Deader Than Dead, but can occasionally be enacted by The Hero when the Big Bad has run away from similar confrontations in the past. Fridge Logic tends to come into play as soon as the viewer realizes that sending the flames directly under the feet of the hero is probably a better idea on the part of the villain, but let's face it, it looks cool. The Ring of Fire is a great set up for a hero and villain to meet in a final confrontation, symbolic in that there is no escape from the fight and representative of the emotion of the scene. Expect it to be a part of the The Very Definitely Final Dungeon or any other situation where failure is not an option.

This can often indicate research failure, since natural flames have a natural aversion to forming the perfectly circular rings seen in movies, and unless a propellant has already been shaped into a ring a real fire would fill in the area where the victim is standing, and that's assuming there's no wind to change the direction of the flames. Then again... Nine times out of ten, A Wizard Did It.

Johnny Cash is considered the Trope Namer due to the song "Ring of Fire" being one of his best-known recordings. Although often mistakenly accused of being either about addiction to drugs or having a sexual connotation, the song was co-written by Cash's future wife, June Carter, during the time when she and Cash - while both still married to other people - were having an affair and the song expressed her fears regarding this.

A combination Ghost Butler and the Sphere of Power. Compare Battle Amongst the Flames.

Not to be confused with a certain tectonically active area of the Earth.