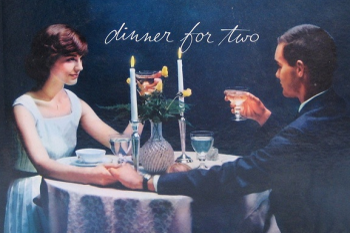 Having a fine dinner with your beloved is one means of romance, but for some reason, having it lit by candles is the defining aspect of its romance. The warm, dim and localized light source of candles in a darkened room softens the lovers' complexions, obscures their imperfections, and provides an intimate ambiance free of distractions. It also helps that fire is often used to symbolize passion and romance.

A frequent subverted example is when the wife makes a romantic dinner for her husband when he comes home, except he doesn't come home for some reason (working late, out with the guys, etc.). He eventually arrives to find candle stubs, a ruined dinner - often a roast which has turned into a hard lump due to overcooking - and a pissed-off wife that he didn't know he pissed off.