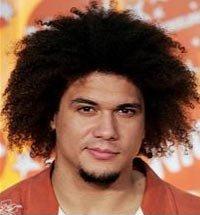 "You know what cool is? You're looking at it!"
Advertisement:

Initially dipping his feet in the family business to amuse himself, peer pressure to aspire for more and the fact he almost instantly caught on with the WWC fans lead to Carly becoming a thirteen time universal champion and the youngest person to hold the title to boot. Still, Carly did not expect his wrestling career to last up until he got a developmental deal with WWE where he, known as Carlito Caribbean Cool (eventually shortened to just Carlito), won the United States Championship in his televised debut match against John Cena, became only the second Puerto Rican to win the Intercontinental Championship after Pedro Morales, and became one half of the first Unified Tag Team Champions of the brand extension era alongside his brother, Primo. He and Primo have also held the WWC tag team titlesnote Which he has also won with Konnan and the Puerto Rican Wrestling tag team titles.

He was released from WWE in 2010, after which he returned to WWC, splitting his time between it and the indie circuit.

Among the other promotions Carlito has left a mark in are Family Wrestling Entertainment, where he won the heavyweight title belt, the Ecuadoran Wrestling Alliance Revolution and the Costa Rica based First Wrestling Society, where he was World Champion of each, The Millennium Wrestling Federation where he won the undisputed title, the Funking Conservatory where he has won the television championship belt and the Peru based promotion Imperio, where he won the world title in his debut. The list does not stop at them either. Back in his home WWC, he went on to win the Puerto Rican Title belt from TNT.

"I spit in the face of tropes that do not want to be cool!":