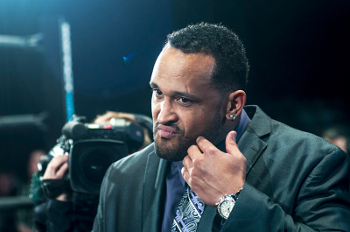 The streetwise wrestling businessman with a master plan.
"1,2, You hear the clock tickin'?
Tick-tock, You about to stop livin'
Tick-tock, I want you to remember me
Tick-tock, but the dead don't have no memory."
— "I'm Comin'", his WWE entrance theme
Advertisement:

Hassan Hamin Assad (born Alvin Antonio Burke Jr, October 28, 1973) is an American professional wrestler from Liberty City, Miami, Florida who is best known for his work in WWE from 2006-2010 as Montel Vontavious Porter, or simply MVP. He debuted in the Florida independent scene in 2002 as Antonio Banks, where he wrestled in Full Impact Pro, Future Of Wrestling (where he won the tag team titles with Punisher), Coastal Championship Wrestling (where he won the heavyweight title belt) and made several brief stops at TNA. Later he had a run in the Puerto Rican IWA until in 2005, when he signed a developmental deal with WWE and was assigned to Deep South Wrestling in Georgia, where he developed the MVP gimmick, an arrogant, self-obsessed athlete based on Rod Tidwell and Terrell Owens. He debuted on SmackDown in 2006 as Porter, with the storyline of holding out for a big contract and eventually obtaining it. Over the course of his WWE run, he would hold the WWE United States Title

once with Matt Hardy. He left WWE to compete in New Japan Pro-Wrestling until he left in 2013. Then went on to return to TNA in early 2014. He's also won the IWR Tag Team Titles, the infamous Ironman Heavymetalweight Championship belt and the All Pro Wrestling Universal Heavyweight Title. He returned to WWE in 2020 after a surprise appearance in the Royal Rumble which, despite initially seeming to be a one-off, turned into a full time return as the leader of his new Power Stable The Hurt Business.

"Never troped a millionaire? Then read on further"