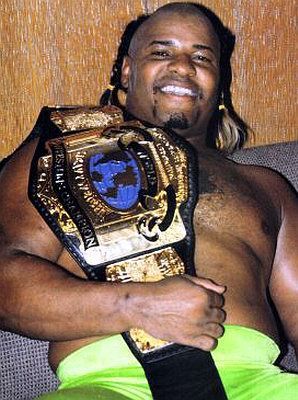 "Like Mama used to say, it be's that way sometimes. Have mercy!"
Advertisement:

King Bailey Parsons Jr. (born June 11, 1950) is a retired American Professional Wrestler as Iceman King Parsons. He debuted in 1979 in Dallas and wrestled heavily for World Class Championship Wrestling, various National Wrestling Alliance territories and many post-WCCW Texas promotions. His one PPV match was his defense of the WCCW Texas Heavyweight Title

with Tiger Conway Jr. as The Dream Team. In 1988, Pro Wrestling Illustrated ranked him #3 for "Most Improved Wrestler," behind Sting and The Ultimate Warrior and ahead of Jeff Jarrett.

"Tropes be that way sometimes":