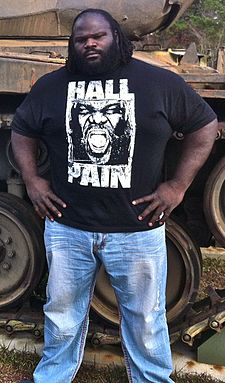 Mark Jerrold Henry (born June 12, 1971) is a retired American radio host, powerlifter and professional wrestler. Before that, he was a two-time U.S. Olympic Festival Champion and holds the WDFPF world records in the squat, deadlift and total. He also holds the USAPL American record in the deadlift since 1995. He is credited for the biggest raw squat and raw powerlifting total ever performed by a drug tested athlete, regardless of weight class, as well as the greatest raw deadlift by an American citizen.

Naturally all that raw power would lend itself well to Monday Night Raw. Mark Henry is also a professional wrestler, dubbed "The World's Strongest Man", and is an 18-year veteran of WWE. He has won both the World Heavyweight Championship and WWE's version of the ECW Championship. On January 13th, 2018, Mark Henry quietly retired from active ring work, choosing to take up work as a producer for the company. He was inducted into the WWE Hall of Fame that April.

At AEW Double or Nothing 2021 Henry debuted for the company and it was announced that he had signed as a coach and analyst for their upcoming new TV show, AEW Rampage.

"See I'm a hard-hitter. One hitter, quitter quitter.
Step up to me, lil' buddy. You steppin' up to a gorilla.
I bang your head, dog, till your head like eggnog.
Don't think I'm scared, dog. I'll leave you red, dog."