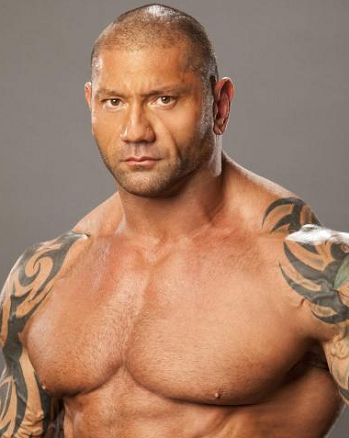 I walk alone.
"Passive by nature. Violent by choice."
Advertisement:

Batista is the ring name of Dave Bautista (born David Michael Bautista on January 18, 1969 in Arlington, Virginia). For more on his acting career and other entertainment ventures, see that page.

He was one of the top-tier wrestlers in WWE, with his tenure there lasting between 2002 and 2010, and returning to WWE twice in 2014 and 2019 before retiring from wrestling. During his time in WWE, he was part of the stable Evolution, and became a 4 time World Heavyweight Champion

note 2 times with Ric Flair, once with John Cena He is also a 2 time Royal Rumble winner, having won the 2005 and 2014 Royal Rumbles.

Since his time in the ring, he has also done other works and media, including MMA and acting in various movies and TV series.

He returned to WWE from January-June 2014, formally reentering in-ring competition in the 2014 Royal Rumble match, and winning. He returned one final time in 2019 in a feud with his longtime friend Triple H, culminating in what would be his final match, a No-Holds-Barred match, at WrestleMania 35. After Hunter won the match, Batista officially announced his retirement in an emotional Instagram post

, thanking his fans for supporting him over the years. He was one of two WWE legends, alongside Kurt Angle, who wrestled their last matches there.

"It's time to unleash the tropes":