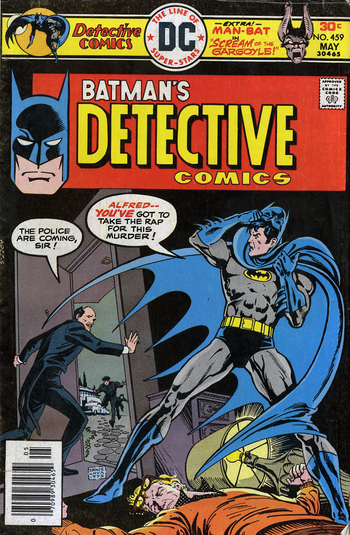 "What I like best about you Neal, is that you trust me."
— Flavor text from the Fall Guy card in Netrunner
Advertisement:

Sometimes, the police simply are not going to stop investigating a crime until they find someone to arrest. In this case, even if you've pulled off The Perfect Crime, the only way to be certain of getting away with it is by setting up some other sap to take the fall for you.

Sometimes the Fall Guy is an accomplice who takes on this scapegoat role willingly. Other times, when you have drawn up plans with the brilliant clockwork evil of The Chessmaster, you might choose a Fall Guy — whether an accomplice of yours, or someone completely innocent — by tricking this Unwitting Pawn into taking the blame, or outright framing them up.

Maybe you choose the guy no one's going to believe. Better yet, you choose a well-meaning sap whose fears and goals you've been able to manipulate via Flaw Exploitation. Alternately, you could pull off a Deceased Fall-Guy Gambit, since a dead man can't defend himself. Another tactic is for a Villain with Good Publicity to try to paint someone who worked for them and committed a crime as an Overzealous Underling who acted alone and without the knowledge of the boss.

Closely related to The Scapegoat and, on a bigger scale, Karmic Misfire.

Not to be confused with a television series or video game.

Mike's not-so imaginary friend seems to be stirring up something fishy at Pokey Oaks.

Mike's not-so imaginary friend seems to be stirring up something fishy at Pokey Oaks.