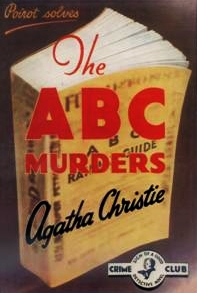 Let us see, Mr. Clever Poirot, just how clever you can be...
A madman, mon ami, is to be taken seriously. A madman is a very dangerous thing.
— Hercule Poirot
Advertisement:

The ABC Murders is a 1936 mystery novel by Agatha Christie, often considered to be one of her best works. Hercule Poirot has received a letter after retirement, daring him to solve a case before a victim for every letter of the alphabet is killed (and it's not a Spoiler Title).

In 1992 the novel was adapted into an episode for the fourth season of Poirot; tropes unique to this adaptation are listed there. The novel received another adaptation in 2018 - a three-part BBC miniseries starring John Malkovich as Hercule Poirot. Two video game adaptations, a 2009 Nintendo DS game and a 2016 multi-platform game, have been released.

, The Alphabet Killer, or the real life Alphabet murders