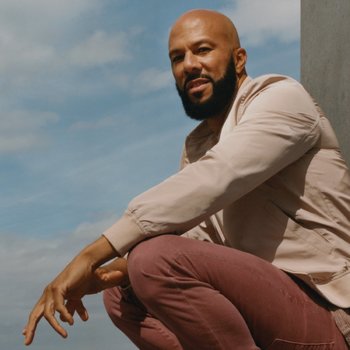 Lonnie Corant Jaman Shuka Rashid Lynn Jr., better known by his stage name "Common"note ”Common Sense” until 1995, thanks to a legal dispute requiring him to change his name (born March 13, 1972), is an American rapper and actor. Common is known for being one of the more prominent rappers in the Conscious Hip Hop genre, and he made it a point to eschew the gangsta/glam-type leanings of popular Hip-Hop, in favor of more positive and socially conscious lyrics addressing issues like racism, unrequited love, etc.

Though Can I Borrow A Dollar? was seen as a promising debut, it was 1994's Resurrection that really put Common on the map, showcasing both his penchant for clever wordplay and his excellent storytelling (often centered around life in Chicago). Unfortunately, while the album was critically lauded, it failed to gain much commercial success, debuting on the Billboard 200 at only #178 and then dropping off the chart the following week. Three years later, he released his third album One Day It'll All Make Sense to similar critical acclaim but only slightly more commercial success. It was with 2000's Like Water For Chocolate that Common finally found both critical and commercial success, debuting at #16 on the Billboard 200 and reaching Gold certification, thanks to its hit single "The Light." After 2002's somewhat divisive Electric Circus, 2005's Be became Common's most critically and commercially successful album to date, thanks in no small part to heavy involvement from a certain other Chicago-based rapper. Common has had a pretty consistent musical career ever since, with his latest album being 2020's EP A Beautiful Revolution (Pt. 1).

As an actor, he's known for his film roles, such as in Smokin' Aces and Wanted. Besides acting, Common also took up film production under his own film production company, Freedom Road Productions. He served as executive producer for the direct-to-video feature An American Girl Story – Melody 1963: Love Has to Win.

"Now black tropes is black tropes, and it's all good; I wasn't salty that she was tropin' Boyz n the Hood..."