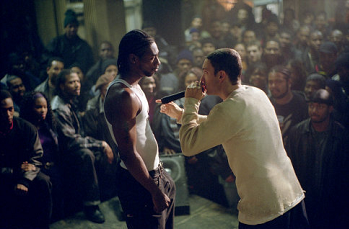 Battle Rapping (also known as "battle rhyming") is a type of rapping that includes a lot of braggadocio and insults, the latter of which is usually aimed at an opposing rapper. While battles between rappers can occur on recorded albums and/or singles, battle rapping is usually associated with live battles, though the verses are usually rehearsed or freestyled spontaneously in those cases.note Typically, standard battle rules say all rhymes must be memorized prior to the battle, but some battlers opt to freestyle instead. Obviously, using a notepad or other type of "cheat sheet" (i.e. writing your verse on your wrist) is against the rules in most battle rap leagues, and will get you disqualified.

While battle rapping is still a relatively new phenomenon, its roots can be traced back as far back as the fifth century to Flyting,

which is a contest of exchanged insults, usually performed in verse. The insults would be extremely provocative, ranging from cowardice to sexual perversion, not quite unlike the insults used in the rap battles of today.

In the early seventies, when rap was still in its beginning, freestyle battles were largely about playing the crowd—specifically, which rapper could get the crowd more hyped up from their performance. On September 11, 1981 Kool Moe Dee created the modern style of battle rapping that's known today. When it was his turn to take on his opponent, Busy Bee Starski, Moe took everyone by surprise by roasting Starski with complex rhyme schemes that were almost unheard of at the time. This battle would single-handedly end the original style of battle rapping and laid the groundwork for the modern battle rapping.

Between the early nineties and the early 2000's, the popularity of battle rapping started to decline and went underground, due to rap's ever evolving landscape. Battling started crawling back into the mainstream by 2002, spring-boarded by Eminem's hit film 8 Mile, which was based around Detroit's underground battle scene, and the various "Freestyle Fridays" rap battles hosted by BET on their show 106 & Park.

These days, there are leagues dedicated solely to battle rapping, and battle rap has been parodied many times in various media, Most notably by Epic Rap Battles of History.

Related to Freestyle Version, though in a more competitive sense. Compare Boastful Rap, which is a main component in battle rapping. Overlaps heavily with The Diss Track, though that trope isn't exclusive to hip-hop.

Note: Keep in mind that a battle rap doesn't necessarily have to be "diss" tracks, or just be restricted to live battles when adding examples. Artists such as Kool Moe Dee have put out several self-contained battle raps on their albums.

Battle rapping outside of hip hop: