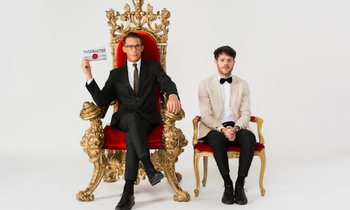 The almighty Taskmaster (Jeremy Wells) and his Assistant (Paul Williams)
"For ten weeks, five comedians will seek my approval by doing things I've asked them to do. Why they're doing this? For attention, I suppose. Some probably need the money...and all of them want this...my golden head. Made from pure golden paint in a hugely uncomfortable molding process. I sure hope it was worth it!"
— The Taskmaster, Jeremy Wells
Advertisement:

Taskmaster is a New Zealand adaptation of the UK-hit Taskmaster. It premiered on TVNZ in 2020.

This iteration features Jeremy Wells as the almighty Taskmaster, with Paul Williams as his socially awkward assistant. Five comedians must take part in various tasks set in and around the Taskmaster Ranch. These tasks require quick and lateral thinking, with the comedians being given points and the highest scorer earning the right to take home prizes of dubious quality and value.

At the end of the series, the overall winner gets to claim the coveted Taskmaster Trophy, a life-size mold of the Taskmaster's head.

This adaptation provides examples of: