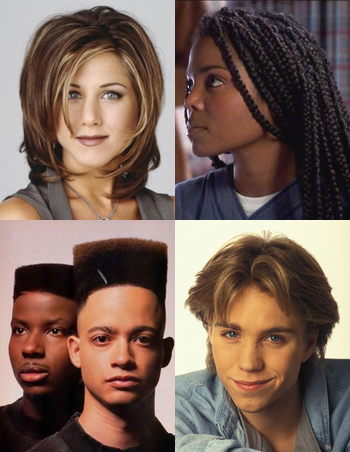 Different styles, all casual. note L - R, top to bottom: Jennifer Aniston wearing The "Rachel", Janet Jackson wearing box braids in Poetic Justice, the duo Kid 'N Play in flat-tops, and Jonathan Brandis in shaggy curtains.
Rachel: When I was little, everybody's parents got divorced. I figured as a grownup, I wouldn't have to worry about it.
Monica: Is there any chance you could look at this as flattering? I mean, she's doing it because she wants to be more like you.
Rachel: Well, couldn't she have just copied my haircut?
— Friends
Advertisement:

Nineties hair isn't just one defining trend. Hair fluctuated between long hair reminiscent of the late 60s/70s and very short hair initially carried on from the 80s but later inspired from the mid-60s. Often the hairstyles, like the clothing of the era, would be the most casual and low-maintenance styles possible. For men, this meant letting hair just fall wherever it may, creating a distinctive style, referred to as "curtains" or a "bowl cut". For girls this meant simply tying it back (usually by gathering it at the nape) so it wouldn't get in the face - and always with a scrunchie. Or in some cases this involved emulating the 1960s-era bouffant, just like some Rachel Green did. In the mid-90's (roughly 1994 until about 1997), it was also very common for teenage and college aged boys to wear their hair like Kurt Cobain.

It wasn't all grunge, however. Getting closer to the Turn of the Millennium, newer style experiments came into play. Crimpers meant people with straight hair could iron it into becoming curly and wavy. If you were into the hip-hop scene, some other hair oddities would be to arrange your hair into something resembling a Beehive Hairdo with a flat-top, or to shave words into the back of your head. For the ladies, this would include things like cornrows and crazy braids. A little bit of '80s Hair had been retained, reserved specifically for extra large bangs. Also, after Eminem hit it big in early 1999, a lot of teenage and college aged boys immediately began cutting their hair short and combing it in the style of Marshall Mathers.

While there's no single hair trend for the 90's, any number of these styles can date a production.

And if you're looking for slick crops for men and pompadoured updos topped with feathered hats for women, kindly go to the other Nineties. The kind of Nineties that happened a century before.