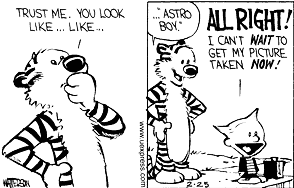 If you don't get the reference, see here.
"Attention duelists! My hair is now an internet phenomenon!"
— Kemo, Yu-Gi-Oh! The Abridged Series
Advertisement:

Almost anything can become a meme, whether it be an outfit, a badass, or a picture of an animal doing something funny. Hairstyles are by no means immune to memification. Hair is a device creators often use to convey information about a character to the audience. For example, a girl with pigtails and a girl with a Mohawk are likely to be very different. In non-visual mediums, largely due to The Law of Conservation of Detail, it's seldom an arbitrary choice on the author's part to describe hair at all.

Sometimes somebody's hair is so stylish or unique that it becomes associated with that person or character. In fiction, weird hair can become so recognizable that to change it would be like losing part of his or her personality. In Real Life, a celebrity's trademark hair could even become a trend, even if was around long before they made it popular.

See Hair Tropes. Note that Anime Hair is especially likely to be subjected to this. Einstein Hair is a subtrope.