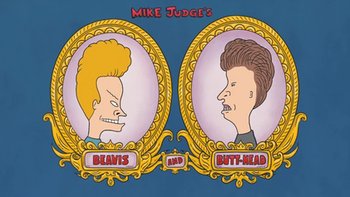 A mid-90s animated cartoon on MTV by Mike Judge, who would go on to make King of the Hill, Office Space, Idiocracy, The Goode Family and Silicon Valley. Its stated purpose was to skewer the then-public stereotype of their viewing audience as lazy, unintelligent teenage slackers who did nothing but watch videos all day and were easily amused by bodily functions and dirty jokes.

The titular characters were a pair of not-too-bright (which in this case is quite possibly an overstatement of their intelligence) heavy metal music fans who virtually did nothing but watch real-life music videos on their TV and make snide Mystery Science Theater 3000-esque comments about things in the videos that annoyed or amused them. These music video commentaries were pretty much inserted for padding into the very short episodes, where the boys would wander around their hometown of Highland, Texas, generally annoying those they met and committing acts of petty vandalism.

The most common targets of the boys' antics were their elderly neighbor Tom Anderson (who was basically an older, more senile prototype of Hank Hill), their geeky school classmate Stewart Stevenson, and most of the faculty of their high school. The character who took the worst abuse was Principal McVicker, who was driven to drink, medication, and in the finale, a seemingly fatal heart attack. The dimwitted duo were, in turn, foiled by the sarcastic Daria Morgendorffer, who occasionally tricked them into publicly embarrassing themselves, and local hot-rodder/gangleader Todd Ianuzzi, whom they admired (similar to how Stewart views them) but who invariably ended up maiming them.

It horrified the Moral Guardians from the get-go, and a few of its more controversial aspects had to be dropped— notably Beavis's pyromania, after they reportedly inspired a viewing child to set a fire in his house that killed his sisternote  According to the child's mother, it was his babysitter who apparently let him watch the series, and prior to the fire incident, he would go around the house laughing like the main characters. In any event, the incident, which was simply an unfortunate accident, scarred the boy possibly for life. In one case in real life which apparently was inspired by the show's antics, a boy killed his brother by giving him a ride in a commercial dryer, the way one of the characters did to the other, which made the show rein in some of its more outrageous acts of stupidity. Also spurring objections were the boys' constant use of fireworks to blow things up, along with their tendency to amuse themselves with physical violence and animal cruelty, most notably the infamous pilot episode "Frog Baseball".

A total of 199 episodes were produced, as well as the 1996 feature-length film Beavis and Butt-Head Do America, several computer games, a 28 issue comic book series from Marvel Comics, and tons of associated merchandise. Additionally, supporting character Daria successfully spun off into her own show. A later Mike Judge creation, King of the Hill, would retool Tom Anderson into the lead character of Hank Hill. DVD and VHS releases of the series have left out most of the Music Video segments due to rights issues, losing a lot of the series' best moments.

In late 2011, the show returned to MTV; while the format had been slightly tweaked — the snark segments now covered both music videos and MTV original shows such as Jersey Shore, Teen Mom and True Life, presumably to prevent the sort of rights issues that surround the original series' snark segments — the show remained the same otherwise. The 2011 series, however, only lasted one season before being canceled again. However, Judge tried his best to find another network to pick the show up again, even as Silicon Valley took up most of his time.

Eventually, Judge's persistence (and the end of Silicon Valley) paid off. On July 1, 2020, the boys were again Un-Canceled; ViacomCBS announced that the series would get two new seasons in which the dull-witted duo would face "a whole new Gen Z world", with plans for additional Spin-Offs and specials. The re-launch was originally intended to premiere on Comedy Central, but it ultimately debuted on Paramount+ along with older remastered episodes, with the duo making a few appearances in the Mega Crossover ad campaign for that service's initial relaunch alongside various other characters and personalities.

On June 2, 2022, a new movie was announced for Paramount+ called Beavis and Butt-Head Do the Universe, putting the idiotic duo through a strange sci-fi adventure for the ages and serving as the launch of the new series.

After a botch attempt at ear piercing, Beavis and Butt-Head are shocked upon learning that they pierced their right ears, which at the time was considered a code that people were homosexual.

After a botch attempt at ear piercing, Beavis and Butt-Head are shocked upon learning that they pierced their right ears, which at the time was considered a code that people were homosexual.