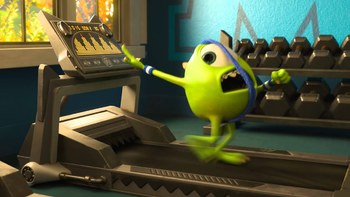 Treadmills are usually a great way to exercise and perfect for those who dislike going outside to run due to extreme temperatures or too many bugs or other hazards. Except of course when they wind up hurting you instead through your own reckless actions.

These types of injuries usually occur when the user decides to turn the speed up to insane levels that they wind up being shot off towards the wall behind them, having objects placed in their path to trip them up and fall forwards acting like a slinky, or they simply just do not watch what they are doing. Either way, expect the end result to be painful. Truth in Television on occasion, which is why most commercial versions you see in gyms have an emergency stop button or a device that clips to the user with a breakaway clip. If the clip comes apart, the machine shuts down.

Usually Played for Laughs as Amusing Injuries. May occasionally be a part of a Training Montage and/or Failure Montage.