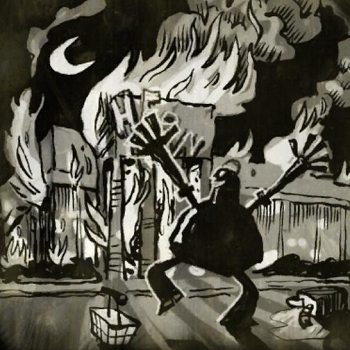 Arson, murder, and more arson.
"This little hamlet has too much boring and not enough burning... Torch everything!"
— Kefka Palazzo, Final Fantasy VI
Advertisement:

is a mental disorder that compels a person to set fires and causes the sufferer to feel enjoyment and stress release (and in some cases even sexual releasenote  although this is known as pyrophilia, which is technically a separate disorder and can be mutually exclusive from pyromania.) from starting and watching fires. In addition to being a very rare disorder, it also has the standard mental disorder caveat of no two cases being identical and usually coming bundled with other issues and a difficult childhood.

While real-life pyromaniacs tend to be somewhat mentally unstable, fictional characters with this disorder tend to exhibit it to the level of evil, murderous Ax-Crazy behavior who really only get their kicks from death and murder with fire. Pyromaniac characters enjoy lighting fires, watching fires, playing with fires, killing with fires, and generally make and use fire whenever they're able to. Whether they have inherent fire powers or merely use flamethrowers or other incendiary weapons, you really don't want to get in their sights.

Note that using or favoring Kill It with Fire does not automatically make a character a pyromaniac; having a mental disorder that makes the character feel enjoyment in the act of starting fires is what makes one a pyromaniac.

May overlap with Ax-Crazy. Compare Psycho Electro for electricity-based powers and Mad Bomber for a common, terrifying overlap. For a more lighthearted take on mental illness-induced criminality, see Sticky Fingers.

Being the evil Elemental of Fire, this is a given.

Being the evil Elemental of Fire, this is a given.