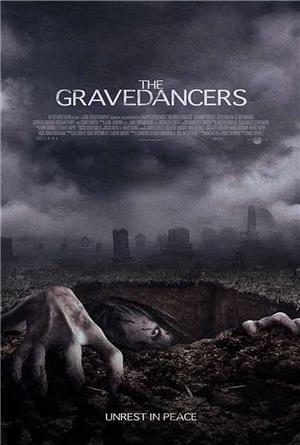 After the funeral of a old friend who died in a car accident, former school friends Harris, Kira, and Sid break into the local cemetery after dark, and after Sid reads a mysterious incantation he finds on one of the nearby tombstones, they dance on the graves. Soon, the three of them find themselves haunted by three different ghosts whose graves they desecrated. Harris and his wife Allison find themselves haunted by a deranged female pianist/axe murderer. Sid gets haunted by a child pyromaniac. And Kira haunted by a sadistic rapist. All of them turn to a paranormal investigator named Vincent Cochet and his assistant Frances to try to help them break the curse they imposed on themselves before the next full moon when they will be killed by the ghosts' wrath.

The Gravedancers contains examples of: