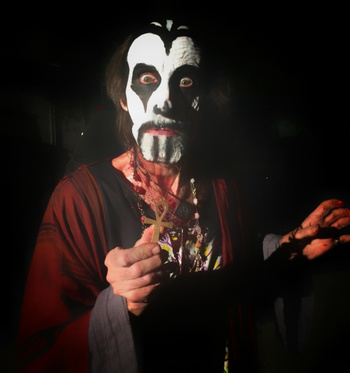 Verily, he is the God of Hellfire.
I AM THE GOD OF HELLFIRE! AND I BRING YOU...
— "Fire", The Crazy World of Arthur Brown
Advertisement:

Truly one of the most theatrical and pyromaniacal musicians ever. Arthur Wilton Brown (b. June 24, 1942) is an obscure man, but one revered as a shining, blazing example of Crazy Is Cool.

After some short stints in Paris doing soundtracks and work with small R&B bands, Brown formed his iconic band The Crazy World of Arthur Brown in 1966 as a trio of himself, keyboardist Vincent Crane and drummer Drachen Theaker. They recorded their eponymous debut in 1968 with the hit single being...

FIRE! I TAKE YOU TO BURN!

The single shot straight to #1 in the UK, soon cracking charts the world over. It even managed to hit #2 on the US Billboard Charts, only beaten by another: Hey Jude!

The Crazy World was not long for our world, unfortunately, as Theaker's fear of flying had nearly surfaced the band's second world tour. He was quickly replaced by young virtuoso Carl Palmer, but the band didn't last as Crane had left to form Atomic Rooster, taking Palmer with him. With World gone, Brown soon became a prolific solo performer, making guest appearances on a multitude of albums ever since.

His solo projects shifted from another short-lived band, Arthur Brown's Kingdom Come, to self-credited stints in Synth-Pop. The Crazy World was born again in 2000note  A lost album, Strangelands, was released in 1989 releasing acclaimed albums including Tantric Lover, Vampire Suite, and the crowdfunded Zim Zam Zim.

While his mainstream success was short lived, he is still revered in Progressive Rock and Heavy Metal circles as one of their progenitors. He continues to tour with Crazy World, nearly 50 years after his landmark single. Truly a Cool Old Guy if there ever was one!