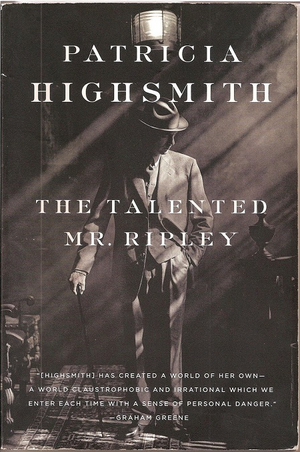 A series of novels written by Patricia Highsmith that chronicle the life of the title character Ripley, a charming and utterly sociopathic man. All evidence much black humor, and are notable as inverted mysteries in which Ripley always gets away with his crimes in the end.
Advertisement:

The labels Affably Evil, Sociopathic Hero and Villain Protagonist describe Ripley well, and every novel after the first invokes Villains Out Shopping by depicting Ripley's affluent life in the French countryside, beloved by his servants and engaging in artistic pursuits. Ripley is also somewhat Ambiguously Gay (or rather, explicitly states he just doesn't know what he is), although it could be argued that, like Dexter, he is simply a rather warped Chaste Hero, having difficulty forming any kind of relationship given his psychological problems.

Other tropes used in the series: