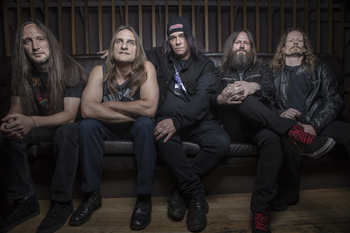 Exodus are an American Thrash Metal band forming in 1980. Considered one of the main pioneering bands outside the Big 4 (in fact, both Scott Ian and Dave Mustaine see them as a fifth member), Exodus have managed a 30 year run save for some hiatuses.

After some initial lineup changes, with the original lineup featuring Tom Hunting and Kirk Hammett, the lineup was finally settled with Gary Holt joining as the main songwriter some time before Hammett left to join Metallica. However, before he left, he recruited Paul Baloff in 1981, with their friendship starting due to their shared love for punk rock and heavy metal music at a house party.

They finally got to work on the debut entitled Bonded By Blood, released in 1985. Shortly and sadly, Baloff was fired and was replaced by Steve Souza. The lineup mainly remained stagnant until Force of Habit. Afterward, they temporarily split up due to issues.

When they temporarily reunited in 1997, Holt managed to get Baloff back in for a live album, entitled Another Lesson in Violence, but were forced to split again when they encountered issues with Century Media, the label that they were signed on to when the live album was finished and released. They got another opportunity to reunite in 2001, and Holt again got Baloff to continue with the band, unfortunately, Baloff died of a stroke a year after, and Souza came back to finish where Baloff left off. Their 2004 studio effort, Tempo of the Damned, intended to be Baloff's studio return, is now dedicated in his memory, with Souza doing the vocals. Later in 2004, Souza was fired and replaced by Rob Dukes, who was their vocalist for three albums as well as a re-recording of Bonded by Blood.

In 2011 Holt became a touring member for Slayer when Jeff Hanneman was suffering from a severe spider bite, and when Hanneman passed away from alcohol abuse in 2013 he continued as a permanent member until Slayer's final concert in 2019. On February 4, 2012 a Paul Baloff Memorial Reunion Concert was held at the Oakland Metro Opera House. Former and current members who attended the event included Kirk Hammett, Rick Hunolt, Gary Holt, Geoff Andrews, Lee Altus, Rob Dukes, Tom Hunting, and Jack Gibson. It was the first they have all played together since 1983. As of June 2014, Dukes and the band have parted ways and Souza has been welcomed back in. Exodus released a new album, Blood In, Blood Out, which is the band's first studio album featuring Souza after Tempo of the Damned.

Notable Past Members:note Only members who played on albums or with songwriting credits are listed.