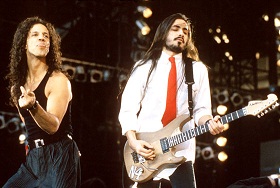 Among the last wave of 80's/90's pop-metal "hair" bands, Boston-based Extreme stand out from the pack thanks to an eclectic musical sensibility owing as much to The Beatles as to Van Halen. Mostly classified as a Funk Metal band, Extreme nonetheless dabbled with several pop forms during their career, ranging from the pre-rock pop of Frank Sinatra to trendy mid-90's Post-Grunge, meshing it all into a series of loose Concept Albums. Through it all, they've maintained a strong technical reputation as musicians, particularly for the soloing of Portuguese-born guitar wizard Nuno Bettencourt.