Music / Explosions In The Sky 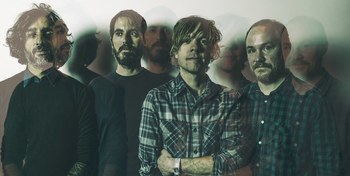 Left to right: Munaf Rayani, Mark Smith, Chris Hrasky, Michael James
Explosions in the Sky are an American Post-Rock band from Texas. As they were unloading their gear before an early show, fireworks were going off nearby. One of the band members blurted out, "Can you hear the explosions in the sky?" The name stuck. Here we go...
Advertisement:

Formed in 1999 after drummer Chris Hrasky posted a flyer in a record store reading "wanted; sad, triumphant rock band," the foursome (Hrasky and guitarists Michael James, Mark Smith, and Munaf Rayani) quickly became well known in the Austin music scene, and were signed to Temporary Residence Limited after another Austin band submitted their demo accompanied by a note reading "This totally fucking destroys." They have since then released six albums, composed music for the films Friday Night Lights and Lone Survivor, been Mistaken For Terrorists, curated a music festival, and still managed to remain in relative obscurity.

Explosions in the Sky albums so far are: