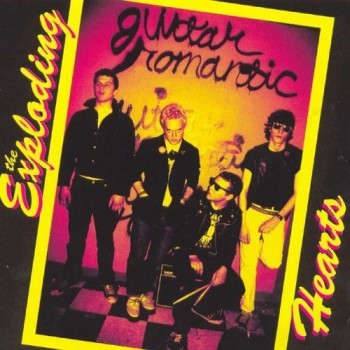 Modern kicks which will make you shiver and shake.
"During a time when Julian Casablancas’ detached cool and Jack White’s straight-faced blues worship were at the forefront of the largely self-serious “rock is back” albums, Guitar Romantic was refreshingly fun. It paired Cheap Trick-ian riffs with songs about getting high and falling in love. The band ushered in tambourines, finger snaps, bubblegum melodies, barroom pianos, and ripping guitar solos. And their lyrics were funny. (From 'Sleeping Aides and Razorblades': 'You know the first time you left me, babe, it was so hard/ And it didn’t hurt you told all my friends I’m a reee-tard!')"
— Evan Minsker, MTV
Advertisement:

Guitar Romantic was the debut album of The Exploding Hearts, an ill-fated Pop Punk group from Portland, Oregon. Little-noticed on its April 2003 release, Guitar Romantic nonetheless became a minor cult hit on the strength of a supportive Pitchfork magazine review and illegal mp3s from Germany. Not four months later, a van accident claimed the lives of three quarters of the band; this had the perverse effect of bringing press to the original album, canonizing it as a classic of the genre.