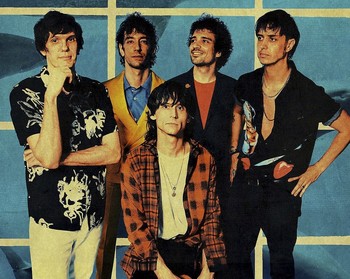 The Strokes are an American alternative rock band. The band's members are Julian Casablancas (lead vocals), Nick Valensi (guitar), Albert Hammond, Jr. (guitar), Nikolai Fraiture (bass guitar) and Fabrizio Moretti (drums and percussion). They were one of the four bands that were supposed to "save rock and roll" (specifically, Alternative Rock radio) for the new millennium along with The Vines, The White Stripes and The Hives. Out of those four, only these guys and The White Stripes are really remembered fondly by

The band was formed in 1998, but the members have known each other since childhood. They released a few EPs that got them recognition and which launched a massive bidding war between record labels. Finally, the band settled with Rough Trade Records (in the UK) and RCA Records (everywhere else) and released their first album, Is This It, in 2001.

Then...well, it's a bit hard to explain what happened from there. Their next two albums, Room On Fire (2003) and especially First Impressions Of Earth (2006), are not as highly regarded as the first. Many fans theorized that Executive Meddling was involved, but the truth likely lies in the fact that they set the bar so high with the first album.

The band went on hiatus after the disappointing reception of First Impressions Of Earth, just to come back in 2011 with a new album titled Angles. The album has gotten very mixed reviews from critics, showing a step up from First Impressions Of Earth but still not a return to form for them. The band released their fifth album Comedown Machine in March 2013, to a predictably mixed reception.

Following another hiatus, the band released their sixth album titled The New Abnormal in April 2020.