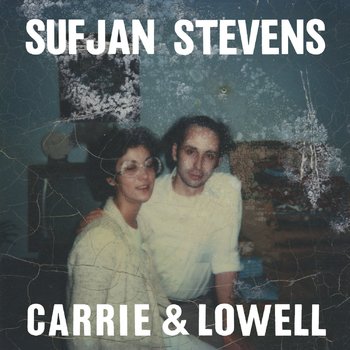 Carrie & Lowell is the seventh studio LP by American singer-songwriter and multi-instrumentalist Sufjan Stevens, released on March 31, 2015. The album is autobiographical, dealing primarily with Stevens’ grieving process following the death of his mother, Carrie, in 2012.

Carrie suffered from depression, schizophrenia, and addiction, and was absent through most of Sufjan’s childhood. Sufjan’s struggle to come to terms with their relationship and to forgive his mother for her abandonment while simultaneously mourning her loss forms the emotional core of the album.

Meanwhile, the "Lowell" of the title refers to Carrie’s second husband and Sufjan’s stepdad, Lowell Brams, who served as a surrogate father for Sufjan and with whom he co-founded his record label, Asthmatic Kitty. (In 2020, the pair also released an instrumental New Age album they recorded together, entitled Aporia.)

Stylistically, the album marked a return to the stripped-down indie folk Stevens was known for early in his career, but which he had increasingly moved away from with releases like Illinois (Baroque Pop) and The Age of Adz (Electronic Music). Carrie & Lowell features almost no percussion or symphonic elements, consisting instead of lo-fi guitar and keyboard-led songs with occasional understated electronic touches.

Reception from both fans and critics was overwhelmingly positive; it is tied with 2005’s Illinois as Stevens' highest-rated studio album on Metacritic, and is the site's second-highest-rated album of its release year (after Kendrick Lamar's To Pimp a Butterfly, an album which, incidentally, includes a sample from Stevens' The Age of Adz).

Stevens toured extensively following Carrie & Lowell’s release, performing dynamic rearrangements of the album’s songs with an accompanying video and light show. He subsequently released his first ever Live Album, Carrie & Lowell Live, in 2017. (This is currently his best-rated release on Metacritic, scoring one point higher than the studio version itself!) Stevens also put out a companion EP, The Greatest Gift Mixtape: Outtakes, Remixes, and Demos from Carrie & Lowell, the same year.