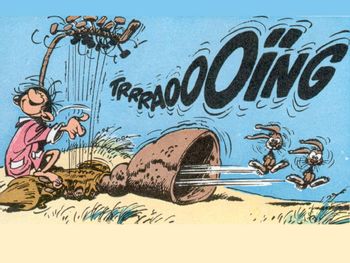 Yes, it's a musical instrument. Sort of.
Advertisement:

Weird and wacky musical instruments, that can show up in comedy, fantasy or SF, which came straight out of the author's head and look, well, weird—and probably wouldn't work in real life. The ones that do work in real life are mostly based on an existing musical principle, but explored in a new way with novel materials and some bits stuck on. Maybe they aren't even actually intended to make music. Some are really more like noisy Rube Goldberg Devices.

Compare Everything Is an Instrument, where things not designed or intended to make music do.

Often, but not always, played by a Dreadful Musician. Also not unusual for a Trash-Can Band or for kazoos to be depicted this way.