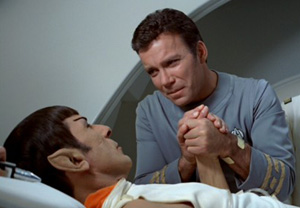 It probably originates from the old days, when the homosexuality taboo was serious enough that every gay pairing was considered a Crack Pairing, so when authors wrote same-sex characters as very intimate with each other, audiences largely accepted that they were just very good friends, and moved on, or when authors wrote outright references to homosexuality, most just laughed at the sheer absurdity of the thought.

With the gradual dissolution of homophobic moral codes, more and more media creators have been able to produce and share work featuring openly queer characters who are unambiguously in same-sex romantic and sexual relationships, changing media forever. Still, many Yaoi Fans and Yuri Fans willingly interpret any interaction as potentially gay for characters without canonical orientations and even for those specifically stated by their creators to be straight (in which case the author may be very annoyed by the fans' insistence otherwise).

In the related trope called Foe Yay Shipping, even rivals or mortal enemies can get this treatment by fans and writers alike, especially if they have a more friendly past together, or one is inordinately obsessed with the other. In Fan Fic, this is the direct cause of many a Slash Fic.