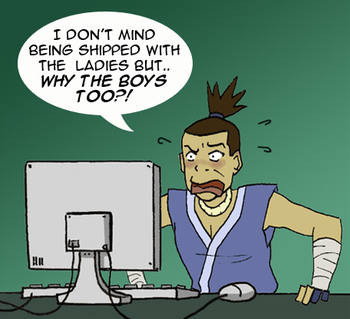 by Booter-Freak
"The archtypal slash pairing is based on the existence of a clear contrast coupled with a close emotional bond. Given that the standard example is Kirk and Spock, this almost doesn't even need elucidation. He's impulsive and rash, he's cold and logical, and yet despite that something glues them together. What could it possibly be? Clearly their need to rip each other's uniforms off and shag like bunnies."
— El Sandifer, TARDIS Eruditorium

The most common definition of Slash is a Fan Fic that pairs two (or more) characters of the same sex. Often, "slash" is used for male/male pairings only, while "femslash" or "femmeslash" are used to define a female/female pairing (using an "x" symbol rather than a / between the names works too, it’s a matter of author preference). In most cases, one or both halves of the pairing is heterosexual in the original work, and part of the allure is the normally-straight character(s) realizing their same-sex attraction.note Sometimes, it's implied that they've always been attracted to the other half of the ship and have been keeping it secret, even if it's never hinted at in canon. Or the story skips the "why" altogether and is just them getting it on.

The more lopsided the male-to-female ratio in the original work, the more common it is to have slash pairings rather than straight pairings in the fandom.

Slash is often also used to pair up Heterosexual Life-Partners. Of course, some canonical works, especially Boys' Love and those with a Cast Full of Pretty Boys, invite such reading by playing the ambiguity for all it's worth. It's also common to (sexually) pair characters who are nemeses in the source material, in Fanfic's own version of Slap-Slap-Kiss and The Masochism Tango.

The origin of the term predates the World Wide Web, going back to 1960s fanfic writers, specifically those interested in Star Trek, who wrote "Kirk/Spock" fiction, pronounced "Kirk Slash Spock." In many (but not all) communities, the ordering of the names is used to indicate a power relationship, and who exactly is the dominant member.