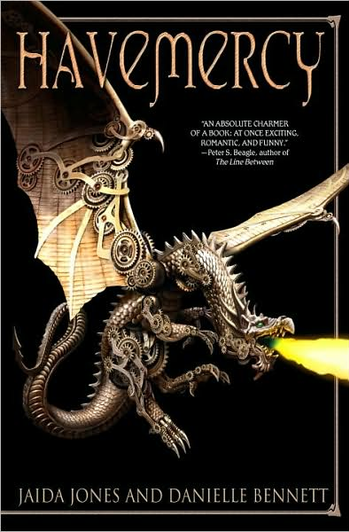 Havemercy is the creation of Jaida Jones and Danielle Bennett, two college students and LJ users who decided there were entirely not enough of the three above things in their lives, and set out to write a charming, exciting, funny steampunk fantasy. They've garnered a loyal fanbase pretty quickly, which likely has something to do with the fact that Ms. Jones is the coauthor of The Shoebox Project

, which... possibly has an even loyaler fanbase.

Anyways, Havemercy tells the story of four men in the alternate-Russia-based country of Volstov: Royston, the magician; Hal, the quiet country boy; Thom, the scholar; and Rook, the airman. And, oh yes, the airmen ride dragons. But not just any dragons. No, these dragons... they're made of metal. And they're Volstov's greatest weapon in the war against their neighbors, the Ke'Han.

... A war that takes a bit of a backseat for most of the novel, because other elements are far more interesting. Royston is banished to his brother's home in the countryside for being... different. It's there that he meets Hal, and something starts to stir. Meanwhile, after a bit of an incident involving the wife of a diplomat, Thom is asked to teach etiquette to the Dragon Corps, including the boorish, foulmouthed, snarky Rook.

In essence, it's a fangirl-friendly, Ho Yay-packed, very clever sort of high fantasy.

The sequel, titled Shadow Magic, was released in the summer of 2009. It follows the story of diplomatic peace talks with the Ke-Han, involving a new cast of main characters. Caius and Alcibiades, who both featured minor roles in the first book, are both sent as part of a group of diplomats to the Ke-Han capitol. Caius is a slightly crazy, very effeminate young man who will mess you up. Alcibiades is a gruff soldier who is not at all happy with the job he's been given. Joining them are Mamoru, a prince of the Ke-Han who is probably the nicest person you will meet in this book, and Kouje, his loyal, duty-bound retainer. The general consensus is that the second book is just as good, if not better, than the first, with what might possibly be even more Ho Yay stuffed in.

The third book, Dragon Soul, released in the summer of 2010, runs approximately concurrently with Shadow Magic. It follows Rook and Thom, returning from Havemercy, this time on a journey to the Hanging Gardens of Eklesias, despite the fact that Rook doesn't even know where the fuck they are. Said journey gets derailed almost immediately once Rook finds out people are digging up and selling bits and pieces of the dragons destroyed at the end of Havemercy, possibly including Havemercy herself. He is not pleased. Madoka, a Ke-Han scavenger, is also roped into the plot, very much against her will, and Malahide is sent out as a spy for the Esar to find out who's selling the dragon parts.

The fourth and, at least for now, final book in the series, Steel Hands, was released in August of 2011. It features Balfour and Adamo, two of the airmen from the first book, as narrators, as well as two new characters, Laure and Toverre. It deals with a continuation of the plot of Dragon Soul, and the effects the events of that book have on Thremedon.