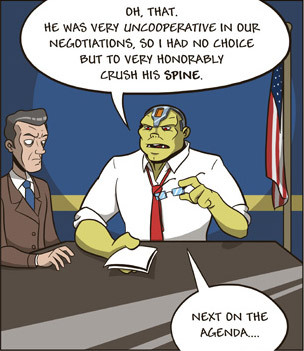 An Ambadassador is a character whose role is that of a diplomat or negotiator. But when the peace talks fail they advance their agenda with violence. They will have skills in Aggressive Negotiations and experience with Blood on the Debate Floor. Any enemy leader or officer who thinks he can Shoot the Messenger will soon learn why this is a bad idea. This is a diplomat who does not need a diplomat's traditional immunity.

They may be someone that Minored in Ass-Kicking. A Guile Hero who outfoxes red tape is also possible. May overlap with "Ass" in Ambassador, if their ability enables them to think they can walk over the other party.