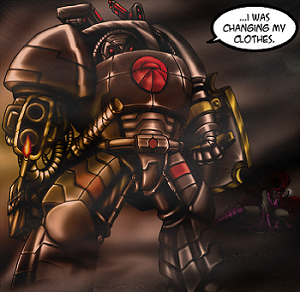 Yes, that is a Tauminator.
Advertisement:

is a comedic and brutally grimdark webcomic by Darius "True_Darius" Craine and Legault that is most certainly not taking place inside the world of Warhammer 40,000. Many names are closely related yet different from a certain tabletop game for copyright reasons, but this rarely detracts from the enjoyment of the story, comedy or action. It is absolutely unsuitable for minors and a few pages are decidedly NSFW.

The story follows four protagonists: an Ax-Crazy Kroott named Skraat, two deeply depraved Ttau, Sha'shiva and Kor'la, and their superhuman Sergeant Rock Zael Johnson as they take on a galaxy where everything is trying to kill everything else.

As the story begins, Sha'shiva, Kor'la, and Skraat are training at a Ttau Military Academy under Johnson when two Eldar crash-land on the grounds after escaping an attacking Nyd swarm headed for their spacecraft world. The Eldar convince the Ttau to help them warn their home, and the group set out on a quest. Things get progressively darker from there.

The comic began its run September 2009 and concluded April 2019. Following its conclusion, Craine began a new totally-not-40k-based comic, In Faust, set in the Imperium.