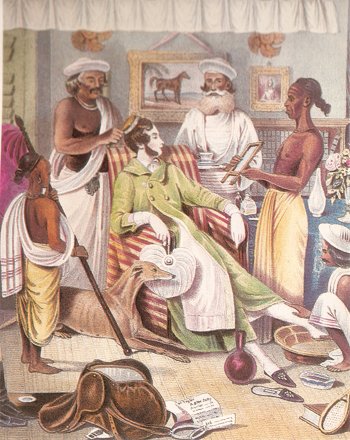 Indian servants attending a British officer
“It is not the pitiless operations of economic laws, but it is thoughtless and pitiless action of the British policy; it is pitiless eating of India’s substance in India and further pitiless drain to England, in short it is pitiless perversion of Economic Laws by the sad bleeding to which India is subjected, that is destroying India.”
—Dadabhai Naoroji, author of the book Poverty and Un-British Rule in India.
Advertisement:

The British Indian Empire (1858-1947), known colloquially as the British Raj ('Raj' is Hindi/Urdu for "reign"), came into effect as the successor of the Company Raj (1757-1857). British rule in India was initially conducted by the largest corporation in the world whose charter gave them exclusive rights to totally monopolize trade in India, and which from the very beginning led them to use violence repeatedly to maintain, sustain, and extend that monopoly.

The East India Company initially came as traders but they were jealous and paranoid about having their privileges undercut by rival traders. This led them to clamp down on unaffiliated British traders who weren't part of the EITC. They basically ran their organization like a protection racket and ensured that princes or local merchants who made deals with traders not part of EITC would get sanctions, loss of privilege, and when all else failed actual violence. This made the EITC unpopular even in England, and they used their wealth and political influence to undercut or suborn critics and naysayers. This at times led to curious spectacle where for instance the British Pirate Henry Avery who robbed the Mughal Trading Fleet Ganj-I-Sawai, in the largest, and possibly most brutal, pirate heist of all time, was celebrated in England as a folk hero for basically showing that independent crooks can rob the Indians as opposed to the EITC with their more sustained, organized, more expensive, and methodical form of plunder. The activity of the EITC in India, ultimately made them unpopular with the local Indian rulers who they had successfully courted as clients and vassals but ultimately backfired during the Indian Rebellion, the largest anti-colonial rebellion in any part of the world in the nineteenth century.

Paranoid at the violence inflicted by non-Europeans on its European settler population (this being the nineteenth century, aka the golden age of white supremacynote English officers often called local Indians the N-Word in contemporary letters and correspondence, making no bones about the racist context in how they saw their rule), Parliament passed an act which nationalised the company, albeit with significant compensation given to shareholders and other businessmen, and with no punishment or trial held for their war crimes on the Indian people. The last Emperor of the Mughal Empire had been touted as a figurehead-leader by the rebellious mercenaries and so he'd been exiled to Rangoon by the Company, and an officer summarily murdered the Mughal Indian princes and several members of the royal family were executed in the aftermath of the rebellion. This left the official position of 'Emperor of India' vacant and it led PM Benjamin Disraeli to nominate Queen Victoria as the Empress of India making her and the Raj, in the eyes of local Indians, the successor of the Mughals and other local princes who were left alone and allowed to think of themselves as vassals of the British Crown.note This was also considered important outside of India, on account of rise of Imperial Germany. It simply wouldn't do to have Queen Victoria "outranked" by the upstart German Emperor Wilhem I. And even worse, Victoria's daughter was married to the German Emperor's only son, and when he became Emperor Friedrich III that would result in Victoria being also outranked by her own daughter. Making her the Queen-Empress guaranteed that Victoria retained her "proper" place as the highest-ranking royal in Europe without having to make the United Kingdom itself an "empire" (which would've been problematic to say the least).

The British East India company had only controlled about half of India's land and population. The remainder of the continent continued to be ruled by several hundred largely autonomous Princely States that were under the suzerainity of the British Crown, albeit without any military might to challenge the Crown. The British ensured that no native Prince or ruler could mount any military resistance against them. Even so, India was indisputably "The Jewel in the Crown of the British Empire" as it was the only part of it (settler societies like Canada aside) that didn't run at a (massive) loss albeit it became significantly less profitable after World War I. Eventually the British would be removed from India thanks to the local efforts of the Independence movement, and its many leaders, including but not limited to Mohandas Karamchand Gandhi. In 1947, exhausted from World War II and under great pressure from the Indians and facing bankruptcy in trying to keep a lid on the increasing tension, England left India on August 15th, 1947.

The British East India Company and The Raj after them had done their best to leave Indian society totally unchanged, merely substituting their bureaucrats into the positions of Viscount or Duke or King or whoever was supposed to rule a certain area. Worse still, there were still a whopping five hundred and sixty five Princely States

when the British left a year early (because they were too broke to stick to the schedule after spending every penny they got during WWII) in 1947. The ensuing process of state-building was very, very difficult because they were trying to reform what were effectively pre-modern, largely 18th- and 19th-century bureaucracies into a working modern state. The territory was eventually integrated by a mix of diplomatic and military means

, taking nearly two decades to come under central rule. And that's not even going into the biggest problem—religion. A majority of Indians were Hindu, but there was a large Muslim minority that formed majorities in certain regions—particularly in the northwest, with a bit in East Bengal, as well as Sikh, Jain, Buddhist, and Christian minorities (of which the Sikhs and Christians formed majorities in parts of Punjab and in parts of the north-east, respectively).

Gandhi and Nehru were ambivalent at best about cooperation with the British war effort in World War II—with Gandhi, Actual Pacifist that he was, advocating resistance. On the other hand, Muhammad Ali Jinnah persuaded the Muslim community to fully back the war effort. This last gave some traction to the idea of a separate Indian Muslim state upon independence—before the war, most Muslims were indifferent or hostile to the idea of a separate state. But with the burden of the war appearing to fall disproportionately on Muslim shoulders (or so Muslims were persuaded to believe; whether it did or not is a matter of contention), Muslims increasingly felt separate and accused the rest of the country of not pulling its weight and generally mistreating them. After the war, Gandhi, Nehru, and the Indian National Congress attempted to create a united nation, but now a majority of the Muslims, led by Jinnah and his Muslim League, demanded a new nation exclusively for themselves. The British thought this a splendid idea,note Partition "keeps [the British] from needing to have a policy about" a former colony: they can just deplore the inevitable violence and timidly suggest a peaceful solution—whatever that means. resulting in the partition of India (although it is referred to as Bharat in most Indian languages), and an almost exclusively Muslim Pakistan (which then split in 1971 into its current form and Bangladesh, because it turned out that the two physically separate Muslim-majority regions didn't actually have that much in common other than religion).

For the army of The Raj see Kipling's Finest .

The Raj in popular culture:

Peachy Carnehan: '"Detriments you call us? Detriments? Well I want to remind you that it was detriments like us that built this bloody Empire and the Izzat of the bloody Raj. Hats on!"''