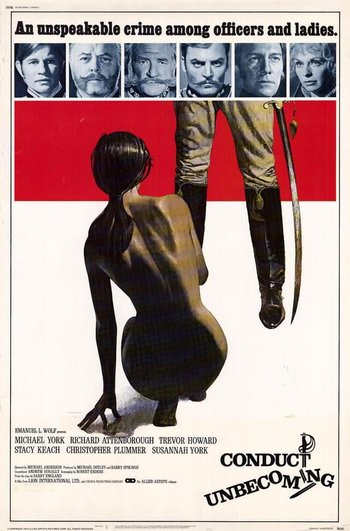 Conduct Unbecoming is a 1975 film directed by Michael Anderson.

The setting is somewhere on the frontiers of The Raj (British India) in 1878. Two junior officers, Lt. Drake (Michael York) and Lt. Middleton, are arriving to join their regiment of the British Army. They could not be more different. Lt. Drake is a squared-away, spit-and-polish young eager beaver who is eager to make his army career a success. Middleton is a louche young man who apparently is only there due to family pressure, as his father was a famous general. Middleton holds the army in contempt and tells an appalled Drake that he intends to deliberately fail his three-month probationary period so he will be cashiered and sent home.

At the moment the two young men arrive, the regiment is holding a ceremony to comment the third anniversary of a battle. Mrs. Marjorie Scarlett (Susannah York), widow of a Captain Scarlett who was killed three years ago, is given special thanks. Mrs. Scarlett has continued to live in the fort in the years after her husband died, and apparently has assuaged her grief by having affairs with various regimental officers. Both Drake and Middleton are warned to stay away from her, but while the straight-arrow Drake takes the advice, the Mildly Military Middleton is extremely intrigued by the sexy widow.

Middleton's general air of sleaze earns him the dislike of every other member of the regiment, but matters come to a head at a regimental dance. Middleton corners Marjorie in the gardens and tries to seduce her. She blows him off. Moments later, a disheveled, bloody Marjorie runs into the ballroom screaming for help. When asks who attacked her, she identifies Lt. Middleton. Lt. Middleton is brought before a court-martial for assault, and clean-cut Lt. Drake is assigned to be his defense counsel. Drake doesn't want the job at all but after he's ordered to accept it he takes it and resolves to do as well as he can. He soon discovers that the seemingly open-and-shut case is far more complex and mysterious than it appears.