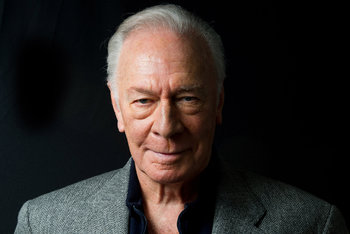 "I think anger does fuel a successful acting career. To play the great roles, you have to learn how to blaze."
Advertisement:

Arthur Christopher Orme Plummer CC (December 13, 1929 – February 5, 2021) was a Canadian film, stage, and TV actor best known for his role as Captain Von Trapp in The Sound of Music, and for mocking that film and his performance nearly every chance he got (though he still considered co-star Julie Andrews one of his closest friends).

He played a huge number of parts over his nearly 70-year career, and despite a large number of acclaimed performances, he wasn't even nominated for an Oscar until 2009, when he was nominated for Best Supporting Actor for his performance as Leo Tolstoy in The Last Station.

He won Best Supporting Actor two years later for his performance in Beginners, becoming, at 82, the oldest person at the time to win an Oscar in any category.note The record has since been broken by James Ivory, who won Best Adapted Screenplay for Call Me by Your Name at 89, and even in acting, the record was also broken by Anthony Hopkins winning Best Actor for The Father at 83. He also received an Emmy for Outstanding Lead Actor in a Limited Series, for the 1972 miniseries The Moneychangers, and a Primetime Emmy for Outstanding Voice-Over Performance, for his narrations of the Madeline cartoons.note He narrated them from 1988-2001, and won the Emmy in 1994. At age 88 he also became the oldest person to even be nominated for an acting Oscar for All the Money in the World (in which he got cast as The Other Marty after Kevin Spacey got booted for numerous allegations of sexual abuse).

He also did quite a bit of stage work. Before hitting it big in the movies he was in the original cast of the 1958 Pulitzer Prize-winning play J.B.. He earned Tony Awards for Best Actor in a Musical in 1974, for the musical Cyrano, and Best Performance by a Leading Actor in a Play in 1997, for Barrymore. All of these awards make him one of the few actors to win an Oscar, and Emmy, and a Tony.

Plummer was a life-long Trekkie, and one of the reasons that he seemed to be having so much fun chewing the scenery in Star Trek VI: The Undiscovered Country is because (in his own words), he was "in geek Heaven doing what geeks love doing: being a geek." Appropriately, in his theatrical career he once became ill, letting his understudy William Shatner take over for that performance and get his big break.

He was the father of actress Amanda Plummer, who should not be confused with Amanda Palmer. Christopher Plummer was also the great-grandson of Sir John Abbott, the fourth Prime Minister of Canada.

He passed away at age 91 two and a half weeks after falling and injuring his head.