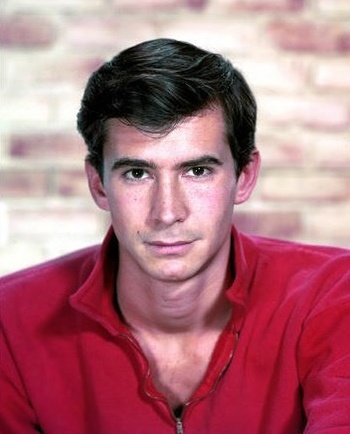 "I have learned more about love, selflessness and human understanding from the people I have met in this great adventure in the world of AIDS than I ever did in the cutthroat, competitive world in which I spent my life."
Advertisement:

He appeared in about 60 movies over 40 years. His most iconic role was without much doubt Norman Bates in Alfred Hitchcock's Psycho and its sequels. He received much acclaim for playing this lone motel owner with a horrific mother-related disorder, and for other roles in films such as Friendly Persuasion, Goodbye Again and The Trial. He also did extensive work in television and on the stage (he starred in the original production of Pulitzer Prize-winning play Look Homeward, Angel) , and enjoyed some success as a recording artist in the 1950s, even scoring a minor pop hit with his 1957 single "Moon-Light Swim".

Perkins passed away from AIDS-related pneumonia on September 12, 1992 at age 60. Perkins's widow died as a passenger on board AA Flight 11 in the 9/11 attacks.

He is portrayed by James D'Arcy in 2012's Hitchcock, which is about the making of Psycho.