Film / The Fall of the Roman Empire 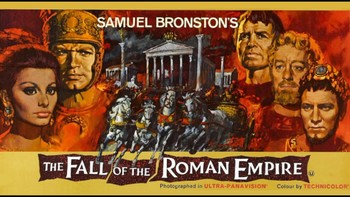 "Livius, if you listen very carefully, you can hear the gods laughing!"
— Commodus
Advertisement:

The Fall of the Roman Empire is a 1964 Epic Movie directed by Anthony Mann and produced by Samuel Bronston. It has an All-Star Cast that includes Sophia Loren, Stephen Boyd, Christopher Plummer, Alec Guinness, Mel Ferrer and James Mason. Omar Sharif also appears, in a small role.

The narrative focuses primarily on the trio consisting of General Livius (Stephen Boyd), and the children of Emperor Marcus Aurelius (Alec Guinness) — Commodus (Christopher Plummer) and Lucilla (Sophia Loren). Livius and Commodus are childhood friends, and he is in love with Lucilla, and all things considered would like to Marry for Love and become part of the Imperial family. However, tensions in the final years of the Emperor's reign and a series of conspiracies by senatorial factions lead to the fracturing of their friendship. Commodus, unexpectedly and against his father's intentions, becomes Emperor, Lucilla enters into an Arranged Marriage, and, little by little, the empire crumbles from within.

Together with the previous year's Cleopatra, the film is considered by some to be the real end of the old Hollywood Epic Movie, or at least the end of epic Sword and Sandal theatrical films for a long time. It boasted the largest outdoor set in the history of film, a 92,000 square meter replica of the Roman Forum. 2000's Gladiator would relaunch the genre and, ironically, borrowed a lot from this film while not quite being a remake.

The movie has examples of: