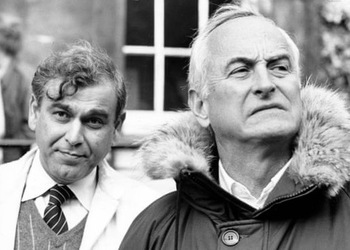 Merchant Ivory Productions is a film production company founded in 1961 by Indian producer Ismail Merchant (25 December 1936 – 25 May 2005) and American director James Ivory (born 7 June 1928). The two were a Creator Couple, sharing a life partnership and a professional one that lasted until Merchant's death in 2005, a total of 44 years.

While the company's early productions were set in India, it is better known for its Period Drama films set in the The Edwardian Era of England, frequently adapted from novels by such authors as E. M. Forster and Henry James. The company reached its heyday in the 1980s and '90s, with a string of critically and commercially successful films. The impact of these films cemented "Merchant Ivory" as a byword for any stately period drama of manners featuring genteel characters.

Merchant Ivory is also known for its long-running Production Posse, including 23 collaborations between Merchant, Ivory and screenwriter Ruth Prawer Jhabvala along with a large stable of respected British actors.

Works by Merchant-Ivory with a page on this wiki: