Literature / The Remains of the Day 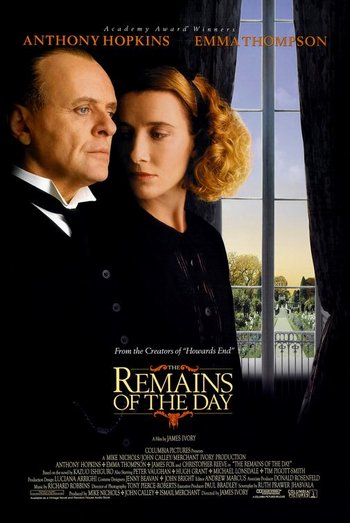 The novel is set in 1956 and narrated by a butler, Stevens, who recalls his career and considers the nature of his profession as he drives through the English countryside to visit his old colleague, Miss Kenton (now Mrs. Benn) for the first time in twenty years to ask her to return to her old job. Darlington Hall, where they worked together, is now owned by a rich American; through Stevens's memories of working there over the decades, and through his way of telling them, we learn not only about the Lord Darlington who used to live there and how his downfall came about, but also about Stevens's character, his relationships with Lord Darlington, Miss Kenton, and his father, and what's left for him after a life of completely devoting himself to the service of another person.

A pre-stardom Lena Headey has a small part in the movie as a pretty servant girl.

This novel and film includes examples of:

Alternative Title(s): The Remains Of The Day